8 of the Most Famous Professors in History Everyone wants to make a lasting impact on the world. Some people do that by becoming famous or finding a long-lost cure — others teach. Ten of the most famous professors in history marked their place in textbooks by sharing their ambitions and passions.

Read more about these influential people and how they made a difference. You may become inspired to walk in their footsteps or discover that you’ve already learned something from their lives.

People didn’t encourage women to become scientists back in the 19th century, but Marie Sklodowska didn’t care. After becoming a tutor and achieving multiple college degrees, she married Pierre Curie. The scientifically minded pair conducted experiments together and in separate studies.

With her education and an encouraging environment, Marie discovered new radioactive elements such as radium and polonium. She went on to develop X-rays and become the first person ever to win two Nobel prizes. It set her up for a professorship at the University of Paris, where she inspired students to fall in love with the scientific field.

As experts built the internet in the 1980s, Randy Pausch graduated from Brown University with a computer science degree and a doctorate from Carnegie Mellon. He went on to teach at Carnegie in the 90s, where he passed on his extensive knowledge of programming to eager students.

Pausch became famous after giving his last lecture, which was captured on video and still reaches new viewers today. His legacy provides students with a unique perspective. Pausch had to shuffle through multiple childhood dreams before finding his true passions. It resonates with most students and graduates because everyone feels the pressure to know exactly what they want in life.

People know Einstein from his research on the theory of relativity and contributions to modern physics. You may not know that he was a professor at numerous universities and lectured in multiple countries until he passed away in 1955. Teaching fulfilled him even after establishing new branches of scientific discovery.

Born just before the Civil Rights movement in the 19060s, Cornel West grew up and achieved a master’s degree in philosophy from Princeton University and a doctoral degree in 1980. He taught college students to think critically about provocative, time-sensitive issues like race, justice, and class through a philosophical perspective.

His teaching helped fuel a societal movement that made future generations work towards positive social change and equality. It’s another reminder of what may not have been possible if societal prejudices prevented West from earning a national platform. Teachers should always maintain an inclusive syllabus so every student feels welcome and safe enough to participate in challenging discussions.

Neil Armstrong became the first human to walk on the moon, which wasn’t a viable career while he was young. He relentlessly pursued his passion for space and science anyway. After marking his place in history, he taught at the University of Cincinnati to inspire students in the aerospace engineering program.

Armstrong’s legacy is about more than landing on the moon. Professors and teachers can learn from his passion and encourage their students to reach for the stars. Empower them to acknowledge their dreams and talk about them in forums so their goals become more real every day.

World-renowned for her publications, plays, winning the Pulitzer Prize, and the Presidential Medal of Freedom, Toni Morrison established a legacy worth celebrating. She taught at Howard University for seven years before beginning to write in her late 30s. Eventually, she became the first African-American woman to win the Nobel Prize in Literature and shatter another ceiling put in place by systemic racism.

Morrison will inspire future generations of both students and educators. While publishing books and plays, she became a professor again at Princeton University. It’s a reminder that any educator can learn from observing other teachers, which people often forget about in the rush of each semester.

After falling into comparative literature at Cornell, Gayatri Charkravorty Spivak taught at the University of Iowa while earning her Ph.D. in comparative literature in the 1960s. She became famous for her postcolonial theories and textual analyses of Marxism, feminism, and literary criticism. Spivak currently works as a University Professor at Columbia, proving that you can be a professor and indulge your passions in multiple other fields simultaneously.

Stephen Hawking is equally known for his work regarding the start of the universe, black holes, and because doctors diagnosed him with Lou Gehrig’s disease just before turning 21. Despite the maximum two-year prognosis, Hawking went on to earn a Ph.D. and reform the scientific world through his speech-generating device. Later in life, he became a Lucasian Professor of Mathematics at Cambridge.

Learn From Their Leadership

The most famous professors in history all share one thing in common — they made their dreams a reality before, during, or after teaching. It’s a position that pairs perfectly with whatever you decide to do, so use it to propel yourself into a future full of possibilities. 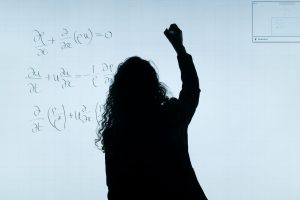